Inches From My Easel

Adventures in Painting
on the Streets of the Bronx

When I first began to paint on the streets of the Bronx, I was startled by the apparent lack of inhibition of the people in the neighborhood. No matter where I set up, someone (and usually many people) would stop by and say something. Even if they had nothing specific to say, their unfeigned interest and blatant observation of my progress at first unnerved me. But over the course of time, I began to realize that the presence of the people around me was neither malicious nor judgmental (well, rarely).

It was just a frank show of interest, curiosity, and often an undisguised pleasure (or amusement) in the fact that an “artist” would find their home neighborhood a worthy subject for a painting. Although I am now accustomed to the social aspect that is an essential part of plain air painting, even after 30 years of working on the streets of the Bronx I am still amazed at the things people have to say. What follows are excerpts from a collection of essays I’ve written which document the unexpected, occasionally absurd, and often humorous experiences I’ve had while painting the Bronx. 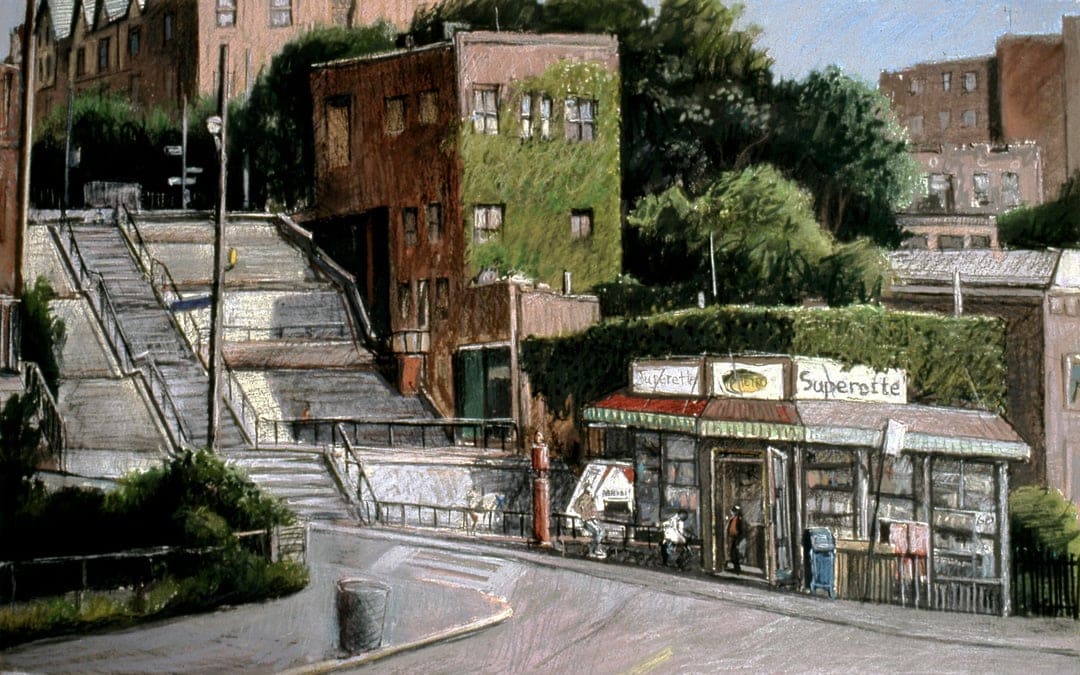 While I was working on a pastel of the superette in my neighborhood, the proprietor of the store came over to see what I was doing.

Somewhat surprised, I named a price and, even more surprising, he agreed to it. When the painting was done, I brought it to him and he framed it and hung it in the store window for all to see.

A couple months later, my friend Peter was visiting and he stopped into the store to look at the painting, which I’d told him about. The owner saw Peter scrutinizing it, and asked if he liked it. “Yes, very much,” Peter said. “It’s a great piece.”

The man smiled proudly and puffed out his chest. “My son painted it,” he said. 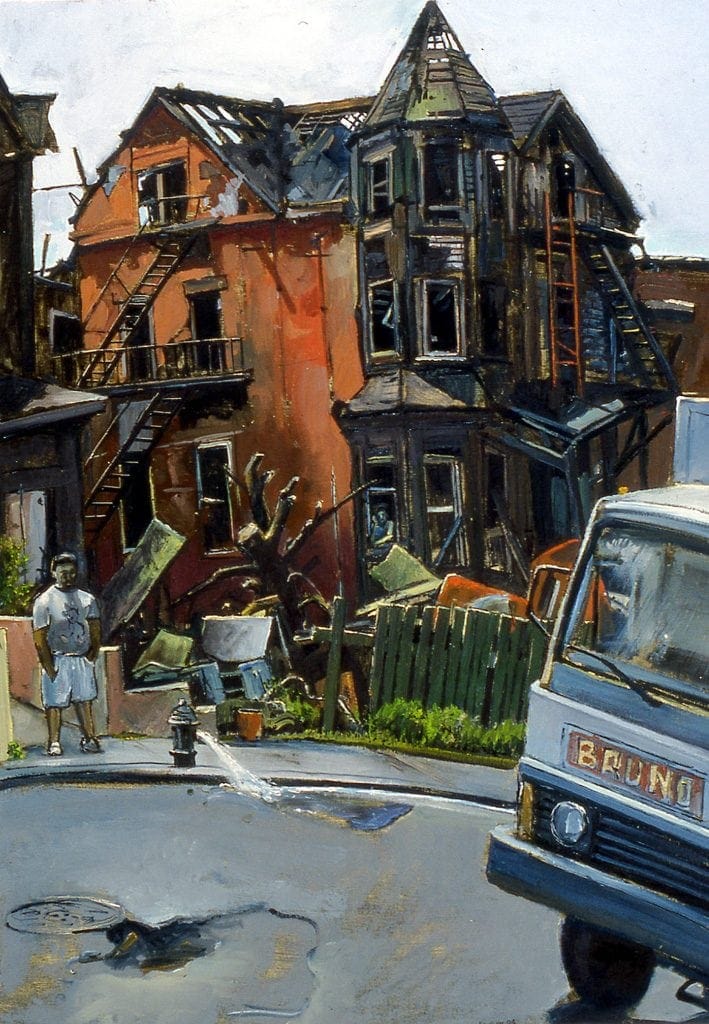 I found a quiet street in the South Bronx, on a beautiful morning, where the bright summer sun cast the old houses in a peaceful, almost romantic light. I could just about envision what this area had once looked like: the sloping hill (now leading down to Park Avenue and the great trough through which the Amtrak trains run) lined with what once had been beautiful houses surrounded by big oak and willow trees.

The houses were sad shadows of their former selves, some still inhabited, some semi-inhabited, some boarded up (like the red Victorian that caught my eye), and still others reduced to splintered ruins. The trees were also past their glory, with stumps for branches and all manner of detritus strewn about them.

I set up my easel and was painting for a while when a group of four or five men came over to hang out, watch me, and carry on.

I began to notice that people would come down the street, disappear into the red house and not emerge for hours. It finally dawned on me that the house I was painting was a shooting gallery, where people would go to use drugs. One lanky guy in a green shirt went inside and appeared a few moments later in one of the windows on the ground floor. Having a person in the building added a whole new element to the picture, and I began to paint him in. But as soon as I started working, his head drooped down and he nodded off. Some of the guys around me called out to him, “Hey, Rico, hold still! He’s painting you, man!” Rico straightened up and gave a lethargic wave. I managed to capture the shape of his head before he nodded off again. Eager to help, the guys around me began to chorus out at regular intervals, “Sit up, man! Face up!” I painted as fast as I could and the community effort towards immortalizing Rico in my painting was a success.

Later in the afternoon, a van drove by and pulled too close to a car that belonged to one of the men standing near me, and he yelled angrily at the driver. The driver apologized and drove on.

They all turned and studied me. “You are white, aren’t you?” No clever response to my tongue. “Yeah,” I mumbled.

The big guy slapped me on the back and grinned, showing two gold front teeth. “Don’t worry about it,” he said. “You’re cool anyway.”

“Do you want to the park today?” Danny asked me. It was one of those mornings in early summer that promised a glorious day, a day when I didn’t want to be shut up in my writing studio, and instead desired the comforts of a blanket spread on soft grass in a green section of the neighborhood. Danny had spent every other mutually free day traipsing around the South Bronx, painting, and this was the first time he’d expressed an interest in doing what used to be our regular summer day trips — to parks like Wave Hill, or the Cloisters or at the very least Van Cortlandt Park. 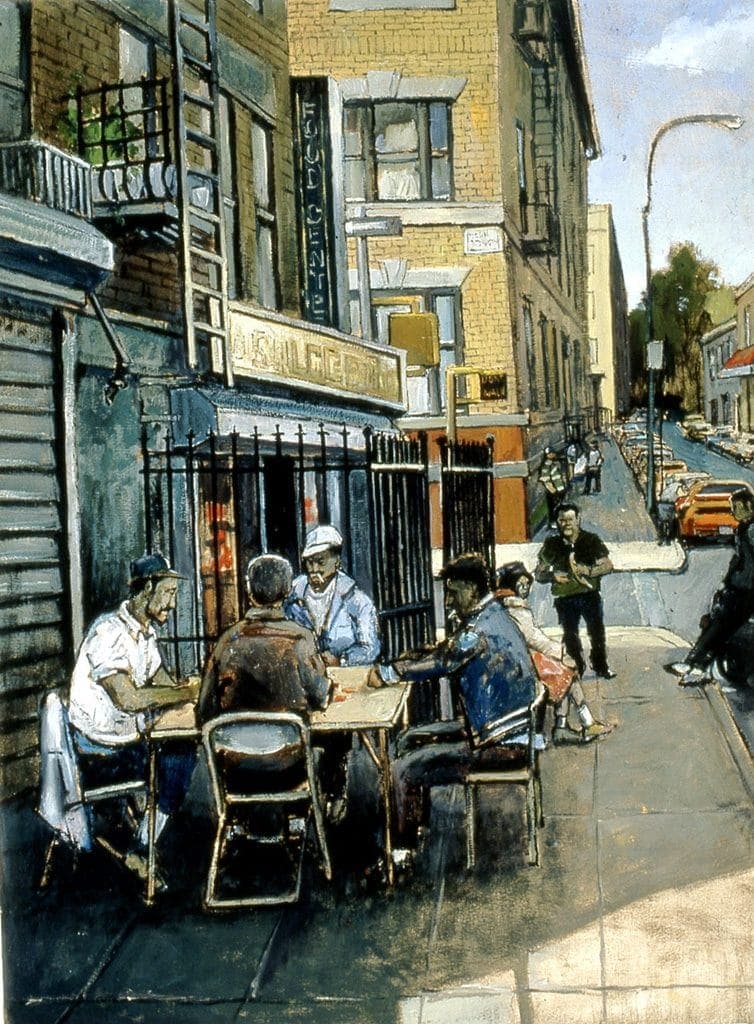 “Yes,” I said, and immediately changed my attire so that I was wearing comfortable shorts and a tank top and outfitted myself with my sunhat, dark glasses, my libretto, my book, my diary, my pens…. everything I needed for a day outdoors, in the park. We loaded up the Volvo and set off. Suddenly, as if guided by some unknown force, the car was making the turns and driving the roads that lead toward the South Bronx. “I just want to show you a few places I’m considering painting,” Danny explained.

Then we were in the South Bronx, driving along streets I didn’t recognize, passing tumble-down buildings and empty lots, the path of our car followed by the eyes of every corner-lounger and stoop sitter. The summer heat oppressed any hint of a breeze, and our un-air-conditioned car was like an oven. Danny wanted me to take pictures, so I did, still thinking we’d be heading out to the park soon. Then he saw something that caught his eye. It was a group of men, sitting outside a bodega in the shade, having one of those endless games of dominoes. “Uh oh,” I said to myself. Danny cleared his throat. “How would you feel about setting up here for the day?” he asked me tentatively.

I looked at the hard concrete sidewalk, with the heat waves beginning to rise up into the now high sun. I saw the old men watching us in the Volvo, and I thought of the fact that I was wearing my shorts and floppy sunhat, and that my blanket would not feel so soft when spread on concrete … I sighed because I recognized the gleam in Danny’s eye when he spots an image that inspires him. “Danny,” I said gently, “I think you’d better take me home.” 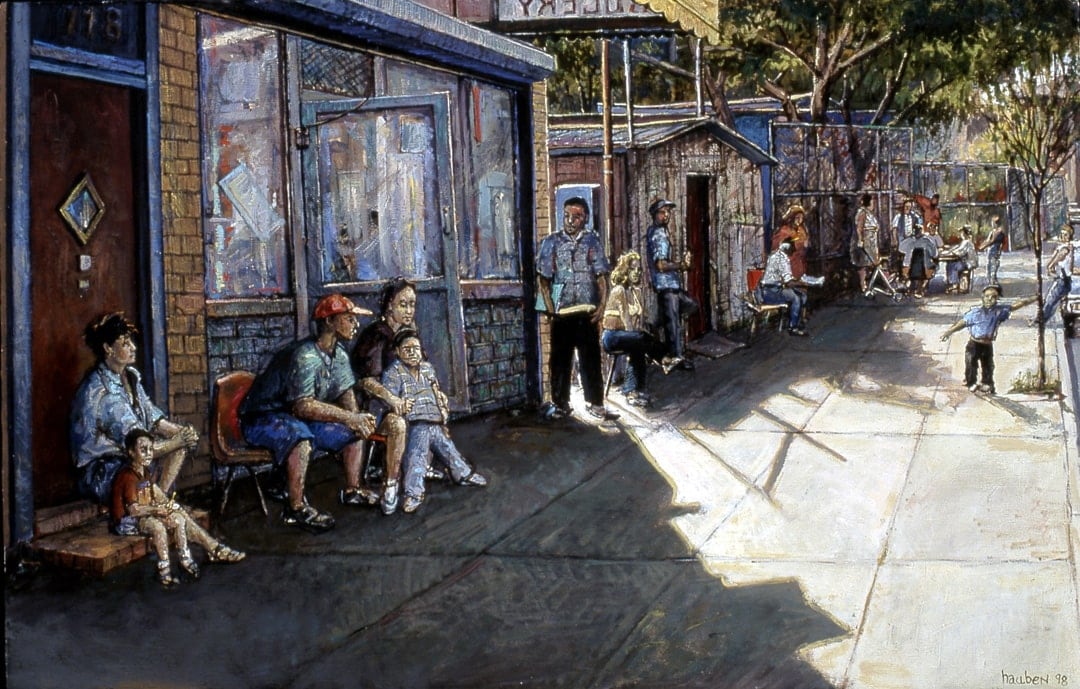 One hot summer day I got in my car and set out intent on painting some busy Bronx intersection. As I was driving, the day started really heating up, and I found myself heading into the more tree-filled neighborhoods bordering the Bronx Zoo. I drove down Southern Boulevard, turned right onto 182nd Street and was immediately struck by the concentration of community gardens in the area.

I pulled over to a bodega sandwiched between two such gardens where several people were hanging out in the shade of the building. I got out of my car and approached the group of children and adults who were standing around and sitting on the stoop and on chairs.

I was met by blank stares and perplexed expressions. Not to be swayed, I started to set up. Soon the children came over and stood around my easel watching intently everything I did.

I had been painting only a few minutes when a woman in the window above the bodega shouted down to me, “You’re in my view! You’re in my view!” I wasn’t quite sure what she meant. “I’m going to paint this scene,” I explained, gesturing vaguely in the direction of all the people on the block. “You’re in my view,” she kept repeating, and not knowing what else to do, I began moving my easel. “Don’t pay any attention to her,” a young man called over to me from the stoop. “She’s just a grouch, she grumbles at everybody.” Several others called out in agreement with him (I began to feel I had entered into the local group dynamic) so I looked up at the woman, gave her a big friendly smile, and finally got down to some painting.

The hours passed and (in the shade) it was a beautiful day. Several folks came by to watch my progress and to chat, and I felt emboldened to ask some of them to hold certain positions longer or to move to one side or another. A table and set of chairs suddenly materialized down at the end of the block where another group of folks assembled to play cards or dominos, and this fit well into my composition. A boy of about thirteen who was walking home from school asked where he could stand to be included in the painting. While I was directing him as to where to stand, another kid complained, “He isn’t even from this block. Why should he be in the picture and not us?” I finally gave in and put everyone into the painting. (I didn’t tell them that once back in the studio I’d have to remove some of them for the sake of the composition.)

All day long, an older man had been sitting on a chair that was chained to a fence halfway down the block. He wore a colorful hat and I put him in the painting, liking the splash of color against the fence. Late in the afternoon, he approached me and took a close look at my painting. “Hey. You’ve got no right to paint me without my permission,” he said. I looked at his face, and then at the painting. His image was less than an inch high and the only possibly recognizable feature was his colorful cap. “I don’t want anybody to find me, and now they will find me because they’ll see me in your painting,” he predicted, extremely distraught. I dabbed my paintbrush on my palette and with a flick of my wrist made his hat black and yellow. This seemed to placate him and he shuffled back to his chair grumbling, “There’s just no privacy in the world anymore, no, none at all.”

error: Content is protected !!
Inquire about buying an Original Painting

You have Successfully Subscribed!

You have Successfully Subscribed!